Read on and free yourself of the items of this list. They will certainly not be missed.

There’s an excellent picture of Daniel Craig somewhere absolutely drowning in a pair of bootcut jeans, but it’s the Simon Cowell montages that come to mind quickest whenever someone mentions the term ‘bootcut’.

With the amount of fits available these days, for every shape and size, there is absolutely no excuse to wear these monstrosities. Unless, of course, you’re going to a fancy dress party as Mr Cowell. On the other side of the denim spectrum to bootcut is spray-on skinny and all of it’s associated iterations. You still see them on the great triangle men of the regional small-town nightclub circuit teamed with muscle-fit tops and sockless loafers.

Loosen things up a bit with a classic slim or straight fit and let your legs breath a bit. The added manoeuvrability can’t hurt either.

Any Type of Mobile Phone Holster

Unacceptable. Leave them to clueless tourists on guided walking tours on European city breaks. Anything that attaches to your belt, unless you’re a tradesperson, should not be attached to your belt. Pick and choose wisely but in this day and age of targeted ads, monolithic personal data theft and faceless trolling, there’s no reason why you should require multiple social media accounts. If people are worth keeping in touch with, make an effort to stay in touch using one medium (and ideally that medium would be ‘in person’).

As for keeping up to date with news and content, you don’t need a catastrophic, real-time, play-by-play of everything terrible going on in the world. Apple News or a similarly curatable app will ensure nothing is missed. Likewise, if you’re looking for inspiration, look beyond your phone at your surroundings.

No, nay, never. You’re not in an early 2000s indie band. A trilby is not the one. Try harder and invest properly or don’t do hats at all. A hat is for life, not just a mid-life crisis.

Invest in the best. The old saying goes, you should spend the most money on your bed and your shoes because when you’re not in one you’re in the other. It’s true. Not only should you not subject yourself to scratchy, faded hand-me-down bedding but you shouldn’t subject anyone else to it either.

Do some tog count research and drive that Egyptian cotton thread count up. 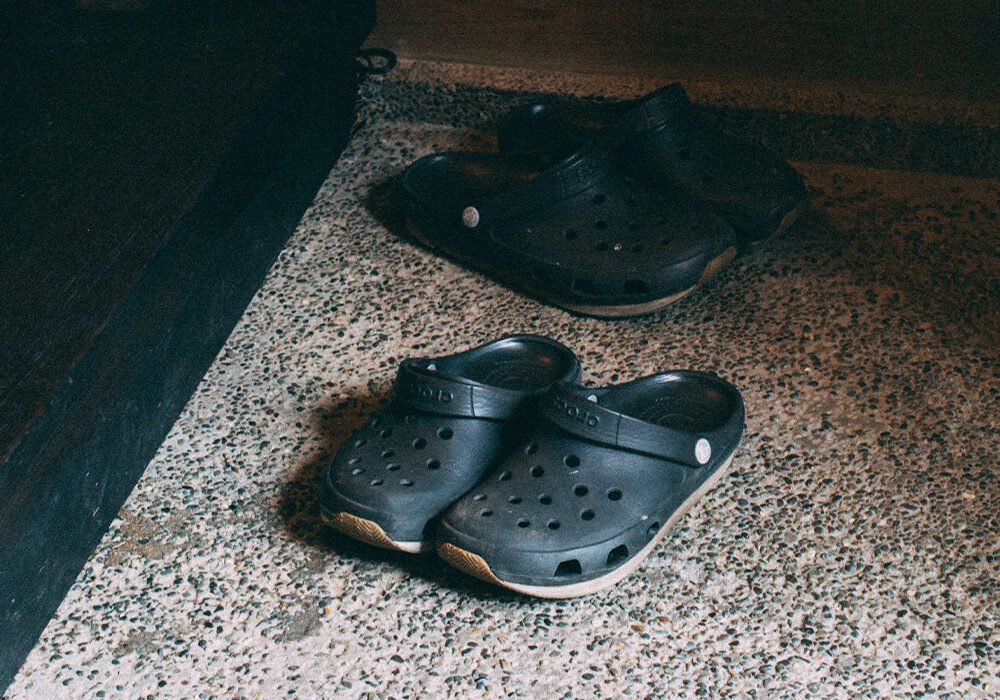 Honestly, the only exception to this rule is medical professionals because we have so much respect for them that they can do what they like. Saying that, if we were about to be put under ahead of surgery and we glanced down, we’d much prefer to spot a pair of Birkenstocks or Mahabis than Crocs. Likewise, nobody wins Masterchef in a pair of Crocs.

The majority of us desired a bean bag when we were younger but were prevented by our parents (who knew better). That a beanbag seems to strongly appeal to the teenage mind should tell you everything you need to know about them. It is adolescent seating for adolescent minds. Upgrade to an Eames chair equivalent and never look back.

A ‘Going Out’ Shirt

Just the thought of the going out shirt (also known as a ‘statement’ or ‘pulling’ shirt) sends a collective shiver down the spine of everyone at Ape. Your outfit should be the statement and the statement should read: I am a grown man and I can dress myself well. That’s it.

You don’t need a selection of loud shirts to proclaim that you’re the party. Nobody needs a selfie stick. You’ve got two selfie sticks attached to your torso and they’re called arms. You can even use them to prop your phone nearby or attach it to a tripod. The very essence of a selfie stick itself is pure narcissism. Ditch it.

In the same vein as novelty items, if a gym or a business conference is giving everyone branded apparel for free you really do have to question a) the trail of misery and destruction that particular item has left behind and b) how long before you inevitably throw it away.

Save yourself a task later on and kindly turn it down.

Reinvigorated by Gareth Southgate in a formal sense (perhaps because everyone was a bit drunk and high on World Cup good vibes) but an absolute no-no as a casual standalone piece. Don’t even think about it. If you’ve got multiple, you’re in too deep. You’re a certified man child. You didn’t want to share as a kid, you threw a tantrum when you didn’t get your own way and you’ve convinced yourself you need to play both Mario and Call of Duty. Pick a side and put the rest on Ebay. While you’re at it, open the curtains and let some fresh air in.

Shot glasses, sunglasses, watches from cereal packets, T-shirts from fun runs, badly-thought-out gifts, things you bought when you were drunk, things that were once in-jokes… honestly, just stop.

The world is full of cheap, unnecessary plastic tat as it is. Don’t add to planet earth’s burden for something that wasn’t even funny in the first place.

Sh*t flickers, winkle pickers, elf footwear… whatever you want to call them, no man should be wearing boots or shoes so pointy you could take an eye out. Pointy footwear is another one of Simon Cowell’s calling cards.

Stick to a heritage shoemaker and classic round toe and you’ll never go wrong. Go out and meet people in real life or at least use a dating app that ensures you reveal something more than a staged picture.

Clothes With Random Numbers/Places/Words On Them

Something that’s always baffled us is the high street’s penchant for seemingly random additions to clothing. T-shirts that say Miami, random numbers, made up racing teams, the list goes on. Just why?

There was a time when you couldn’t go into Zara without seeing a nice jacket, turning it round and there being a sequinned tiger plastered across the back. Better to keep it plain and classic.

Vapelords of the world unite. Put down the vials of Bubbleberry Crush and Toffee Pudding Breeze. Stop holding onto handheld equivalents of characters from Transformers and honking on small disco light dry ice machines. If you’re going to vape don’t make a show of it. Vaping is not a hobby or a lifestyle. If you can’t keep a plant alive then you don’t deserve a plant, be it real or fake. Nothing screams medical waiting room or airport delay more than a fake plant. There’s literally real plants that you can buy that require less upkeep than a fake plant.

Clothing With An Integrated Bottle Opener

Do not get yourself something that can do both. You are not a teenager drinking in the park, therefore you do not need a bottle opener on your belt, in your shoe or on a necklace like some sort of alcohol-dependent Inspector Gadget. A bar blade in the house is fine.

Another seemingly childish obsession. That 2000s uniform of comically large belt buckles shackling up a pair of inevitably terrible jeans by either Ecko or G-Star Raw and finished by a Von Dutch trucker cap. Let’s leave oversized belt buckles in the past where they belong. (And trucker caps, for that matter.) A good idea that sadly hasn’t really come off well in practise. It’s hard to not picture 1990s children’s TV favourite The Demon Headmaster. Just make do with glasses and sunglasses.

The post 23 Things No Modern Gentleman Should Own in 2021 appeared first on Ape to Gentleman.